Pho is a noodle soup with a complex, multicultural background in northern Vietnam. According to the BBC, the popular street food likely originated in Hanoi, drawing on French influences for its use of beef and aromatics. In Vietnam, it is commonly eaten for breakfast, the spices awakening the senses and the hearty ingredients providing energy for the rest of the day.

Following the Vietnam War, the soup spread out from Southeast Asia along with the people emigrating to countries like the U.S., France, Australia and the U.K. Today, pho is an internationally beloved dish that offers great opportunities for a chef to try out various ingredients and impress diners with bold tastes. Students in culinary arts programs can build on a solid understanding of pho’s essentials to create excellent versions of their own. 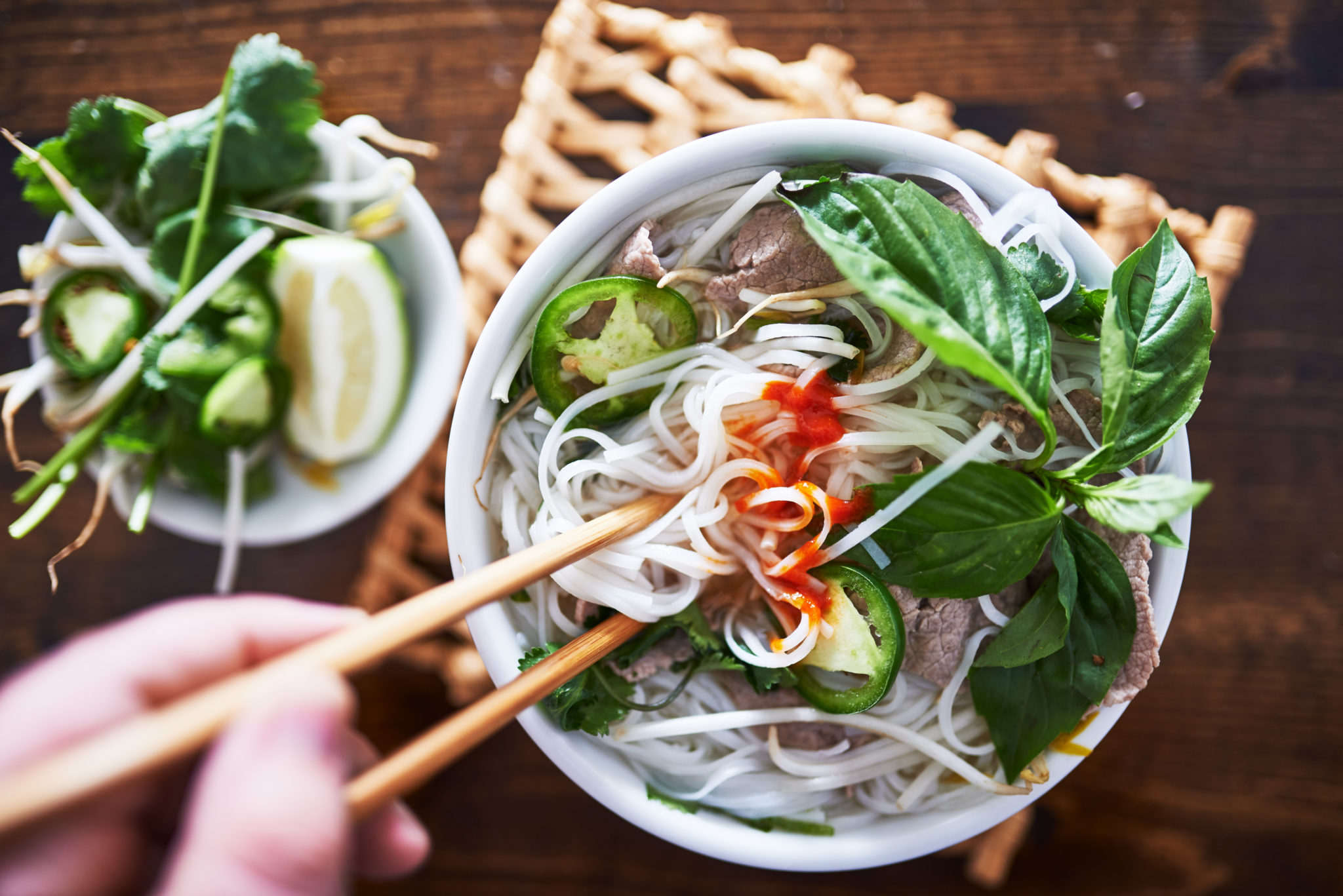 What goes into the bowl
While there are endless variations on pho, Serious Eats explained some of the key elements that are involved in traditional recipes. It begins with a beef broth, usually made from oxtail and flank bones, that is painstakingly clarified like a French consomme. The broth is spiced with aromatics like cloves, cinnamon, fennel, star anise and sometimes cardamom and coriander. Charred ginger and garlic also go into the mix, contributing both smoky and sweet flavors. Chefs complete the broth with a little fish sauce, and then it’s ready for meat and noodles.

“Pho begins with a beef broth.”

Restaurants generally serve pho with an array of garnishes and extras, including various herbs, aromatics, lime and both sriracha and hoisin sauces. However, Food Republic warned diners against automatically throwing all these extra elements into the bowl. First, try the broth itself, appreciating its own flavor before making any adjustments. Avoid the temptation to throw in the sauce unless the broth is particularly weak. The sriracha and hoisin are better used to dip individual pieces of meat. Use your chopsticks to enjoy the noodles, and then pick up the bowl and sip the broth directly. 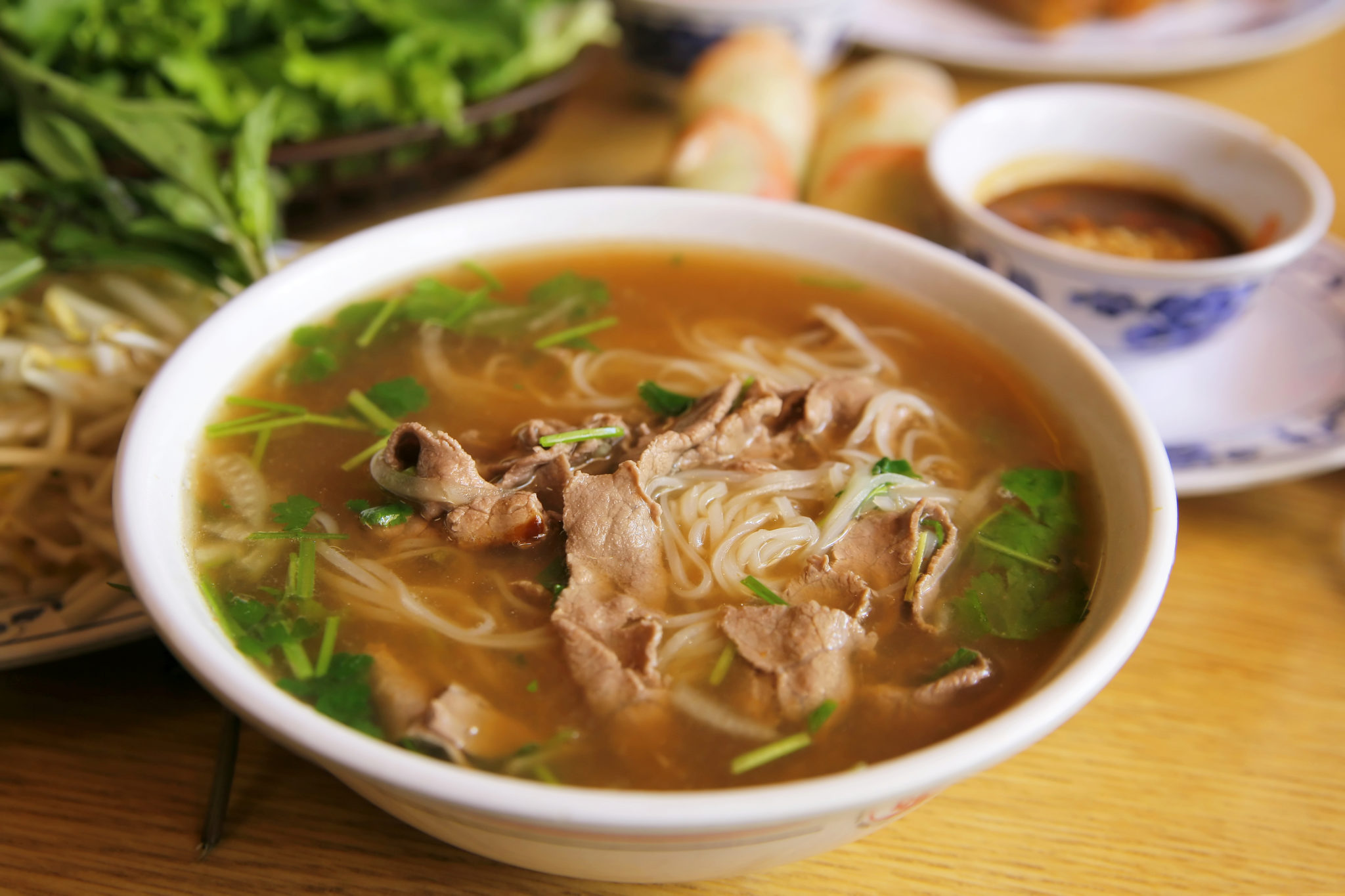 The best pho in the U.S.
American pho lovers have many fine choices when they are seeking a great bowl of noodle soup. While some restaurants seek to capture the authentic experience of enjoying Vietnamese street food, others focus on bringing unique approaches to the dish.

Pho Binh Trailer in Houston is one establishment where the authenticity is never in question. The location has been serving hot, delicious bowls full of exceptional beef broth since 1983, though the business has since expanded to seven restaurants in the area. As The Houston Chronicle pointed out, diners have several appealing choices of meat, including both lean and fatty brisket, bits of tendon and meatballs.

Pho 45 in Garden Grove, California is a similarly unpretentious spot that has gained a loyal following and critical plaudits. The Daily Meal called the restaurant the best place for pho in the country, a distinction earned through a commitment to straightforward quality with an emphasis on consistently light and tasty broth. Customers can select thick or thin noodles and a range of meats like filet mignon, brisket, shrimp or chicken.

“Pho fans who want something different will love Bun-Ker.”

For pho fans who want something a little different in their meal, they won’t go wrong at Bun-Ker in New York City. There, they can enjoy the chicken-based pho ga, made with freshly slaughtered free-range chickens. Chef Jimmy Tu brings flair to a broth prominently featuring shallots, onions, star anise, cardamom, and cinnamon. Those who long for beef pho instead will find it on the menu during the winter months.

Chicago’s Sunda is a New Asian restaurant, bringing together culinary influences from all over the continent’s southeast region. The choice of ingredients for the pho take the soup far from its modest roots as an everyday breakfast. This version is made with bison short rib, bone marrow and sliced Wagyu beef. As Thrillist discussed, the heaviness and richness of the high-quality meat are balanced out with light rice noodles, sprouts, mint, cilantro, Thai basil and chilies.

Pho has come a long way from its street food roots, but the best chefs ensure they never lose sight of the basics that make this noodle soup stand apart. Your culinary academy training may lead you to stir up your own combination of broth, meat and noodles that captures tradition while allowing for personal flair.