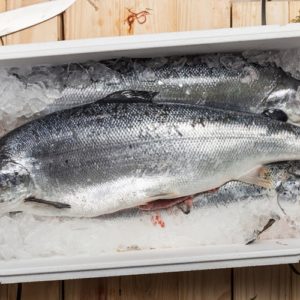 Don’t let those scales intimidate you.

Starting with a whole fish and ending up with a delicious meal might seem overwhelming, but it doesn’t have to be. Austin culinary arts courses may be a few hours away from the Gulf of Mexico, but they still have access to fresh seafood just waiting to be eaten. Don’t let the unfamiliarity of fish preparation dissuade you.

There are two main ways to prepare a whole fish. You can remove the flesh from the fish, creating fish filets, or gut the fish to serve it whole. For any type of fish preparation, your first step is to remove the fins. This serves two purposes: it makes the fish easier to work with, and it prevents anyone from accidentally swallowing sharp cartilage. Once you’ve removed the fins, you can prepare the fish to be cooked and served.

Fileting
Cut straight down into the fish right behind where the skull ends. Then, start from the top of the fish where you made your incision and drive your knife toward the tail, removing the flesh of the fish as you go. Only cut about an inch into the fish until you pass the end of the dorsal fin. Clearing the dorsal fin is the sign that you’ve passed the ribs, at which point you can begin cutting all the way toward the bottom of the fish. Your knife should appear on the other side, near the fish’s belly. Gently move you knife toward the tail to remove the flesh: A forceful knife will cut ribs, but if you follow your knife’s natural motion, you shouldn’t take any rib bone with you. Once you’ve removed the flesh from the body of the fish, gently slice away the skin.

Whole fish
To serve your de-finned fish whole, start by removing the scales. Using a fish scaler or a butter knife, start at the tail and gently scrape toward the head of the fish. You can check your work by running your fingers over the skin, which will feel smooth without the scales. Once you’re done, give the fish a quick rinse to make sure the scales are all removed. Then take off the head, and cut along the fish’s belly, starting at the neck and moving toward the tail. Remove all of the fish’s guts, and take care to pull out the bloodline, which can make the fish taste bitter if left behind. This red muscle that runs along the middle of the fish can be gently brushed out using a kitchen brush.

Once you’re finished slicing your fish, season and cook it your favorite way.