serving in Restaurant design can complement a dining experience.

As a student in culinary academy, you learn about many of the factors that go into developing a successful restaurant, such as producing quality dishes, building a strong team and maintaining high standards of cleanliness and efficiency. However, you may not have given as much consideration to how a restaurant develops a distinctive look and welcoming atmosphere. Read below to learn more about some of the most important aspects of restaurant design:

Build a unified aesthetic
Aesthetically appealing restaurants are based on a clear idea of how the space should look, feel and function. There is no one right way to design a restaurant, but the space should grow out of a single vision, preferably defined through collaboration between the designer and restaurateur.

Restaurant designer James Geier told Spoon University that the process usually begins with an owner or executive chef explaining his or her goals for the restaurant. The client likely provides a menu as well as describing the location and expected customers. It is then the designer’s responsibility to make those intentions a reality by selecting appropriate furniture, decoration, lighting, colors and textures.

Building off the direction from the restaurant’s leadership, the designer strives to create a particular experience for customers from the moment they walk in the door. That may mean embracing minimalism and a cozy atmosphere with exposed wood and communal tables. On the other hand, a designer might create modern, industrial spaces that find a middle ground between being visually striking and inviting. 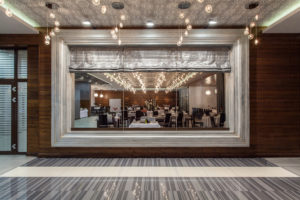 Maintain subtlety
Restaurant designs can noticeably facilitate memorable evenings without interfering with customers’ top priorities: enjoying a meal and conversation. Distractions like a large number of gaudy wall hangings can have a significant impact on diners’ perceptions of a restaurant. However, the right choices of furniture and decorations contribute accents that enhance the patron’s stay without exerting an overpowering pull on his or her attention. Meanwhile, indirect lighting provides sufficient illumination to ensure everyone can see his or her meal and the decor, avoiding an institutional feel that is harsh and unflattering.

Designer Michael Francis said to The Washington Post that smaller details, rather than grand gestures, are the key to creating an exciting design that rewards return trips.

“A space that begins to unfold and tell you little secrets as you look and ponder the space,” he said. “It’s not about perfectly organized spaces. It might actually be a part of the design that is a mistake.”

Keep it functional
Whatever gorgeous artistic touches a designer may add to a restaurant, he or she must take into account what it would be like to eat or work there. Karen Herold, a Chicago-based designer, said in an interview with the Chicago Reader that she prioritizes how the restaurant will operate on a daily basis, thinking out issues like the location of a service station. She explained that functionality “is the most important thing, but the trick is to do it in such a way that no one knows that that’s what it’s about.”

Designers must be mindful of where customers’ locations and sight lines. Most restaurant owners, for instance, would prefer their guests not be too near the constantly opening kitchen doors and privy to behind-the-scenes conversations. An overly clear view of the restrooms might similarly prove distracting, as well as unappetizing.

Instead, diners should each get a glimpse of the major design elements, such as a mural, sculpture or fireplace, while enjoying their individual evenings. They should be able to sit comfortably and uncrowded, even in a communal situation. Servers must make their way easily between the kitchen and dining room without running into customers on their way to the bathroom. All the exceptional forms presented by professional designers have their true foundation in the day-to-day work of food preparation and service.