Writer and creative thinker Roger von Oech once said, “Everyone has a ‘risk muscle.’ You keep it in shape by trying new things. If you don’t, it atrophies and you’re no longer able to take chances.”

One person who has been flexing his “risk muscle” recently is Auguste Escoffier School of Culinary Arts graduate Oscar Beltran. Trying new things has been a defining feature of Oscar’s short time out of high school—and so far, it’s paid off with an international externship and success among tough culinary competition.

Find out how Oscar’s experience as a teen at Escoffier helped prepare him for his culinary future!

Pushing Back on the Expectation of a Four-Year College

Growing up in California, Oscar was always encouraged to try new things. His mother would insist that he sample new foods, expanding his palate at a young age. As a result, Oscar soon developed a love for food, flavor, and cooking.

By age 17, Oscar wasn’t sure what his next step should be. He considered pursuing music in a four-year college, but he wasn’t as excited about the prospect as his fellow students. He felt like the odd one out, unable to share their enthusiasm for a traditional college experience.

But as he talked to his friends, he found that he wasn’t alone in his hesitation to attend college. “One [friend] said that they didn’t want to do a four-year college [either]. She wanted to be a stylist and go to cosmetology school instead. She felt [college] was being forced on her by other high schoolers and parents.”*

Interestingly, it was the COVID-19 pandemic that finally helped Oscar to find his path. Spending his senior year studying from home, he did most of the family cooking. “That’s when it hit me,” he recalls. “I liked to cook, putting flavors together and expanding my [palate].”* This realization, and the subsequent decision to go to culinary school, finally got Oscar excited for his next step after high school.

After doing his research and finding that Escoffier had a campus in Boulder—somewhere new to Oscar but not too far from his home in California—he was sold. And at just 18 years old, Oscar enrolled at Escoffier, pursuing an Associate of Occupational Studies Degree in Culinary Arts.

Escoffier Chef Instructors Pull Oscar Out of His Shell

While Oscar’s fellow high school graduates were relaxing over the summer, Oscar was beginning his courses at Escoffier. 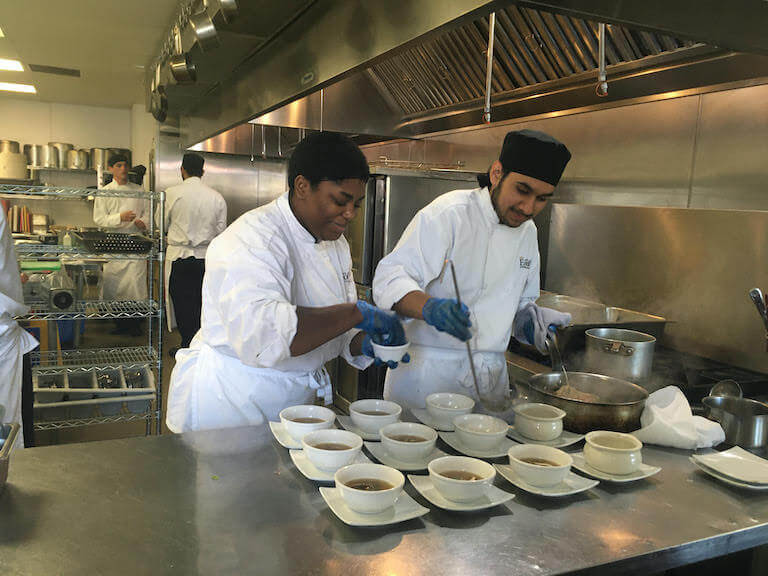 “It wasn’t what I was expecting, since I had the mindset of a high schooler. I kept quiet [at first] because I didn’t know how to talk to adults…I didn’t really want to say my age because I knew that they were all older. I felt like they might [treat me like] the little kid in the group.”*

Being so young, Oscar was very quiet in most of his classes. But he found that his Chef Instructors wouldn’t allow him to stay on the sidelines—even though he tried.

“The teachers are really helpful, and not only in the kitchen. I learned that communication is super important. At that time, I was already known as the quiet kid of the class who didn’t talk that much and didn’t want to introduce himself. I emailed a lot of the teachers secretly because I was too afraid to ask for help in front of the classroom. They would… [require me] to ask them in person instead. That was their plan to get me to communicate more.”*

This subtle guidance helped Oscar to get more out of his classes and make valuable connections with his classmates. In the end, Oscar found that his fears of the older students were unfounded. “My classmates were worth my whole culinary experience at Escoffier. I’m proud to call them my culinary family.”*
Oscar Beltran, Escoffier Boulder Culinary Arts Graduate

Although he enjoyed cooking before attending culinary school, Oscar didn’t have much experience to fall back on.

“I had no idea that there was so much cooking terminology. I didn’t know what a julienne was. I thought, ‘Who’s Julianne, and why are we trying to work on her?’ That was interesting, learning the terminology and the conversions for everything.”*

This foundational education opened up a whole new culinary world for Oscar! And it would prove invaluable in his next act.

“[Culinary school] was chaotic sometimes, because there were 20 people in the kitchen, but something about it was just comfortable. I knew it was where I belonged.”*
Oscar Beltran, Escoffier Boulder Culinary Arts Graduate 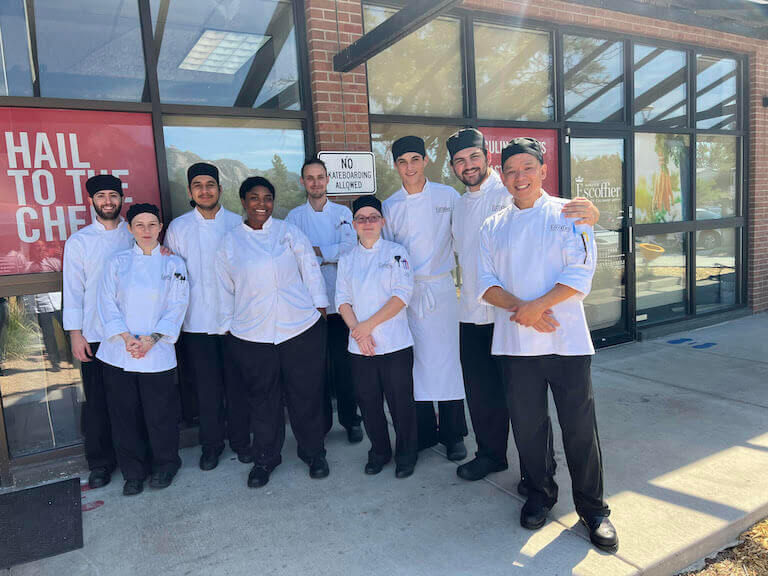 Oscar (third from left) with some of his fellow Escoffier classmates

Going the Distance in Cancun

For his externship, Oscar left Boulder for the sandy beaches and sunny skies of Cancun, Mexico. He learned that he had a relative who worked at Moon Palace Resorts in Cancun, so he used that connection to secure a position. He was placed at Los Caporales, a fine-dining Mexican restaurant at the resort. But while he had an “in,” the experience was still intimidating.

“Coming to Cancun was scary for me,”* he says. His relatives in the area were total strangers to him. So while they kindly let him move in during his externship, it was still awkward to stay with people he’d never met before.

But just like his jump into culinary school, Oscar jumped into the unknown of Cancun. “I didn’t know the place I was staying at or the city of Cancun at all,” he says. “I didn’t even know the hotel I was going to be working at. I got here with no idea. I knew the hotel was called Moon Palace, but that was all I had to go off of,”* Oscar says.

His daily commute to the resort required a 15-minute walk followed by an hour-long ride on public transport for a 5:00 a.m. arrival. Oscar describes the externship experience: “We would bring all our produce and product to the second-floor kitchen where we began to prepare our mise en place. I would be assigned to a team member to help [with the breakfast service] from 7:00 a.m. to 11:30 a.m. After that, [we cleaned] for the dinner service. We would wash all the equipment and reserve any product that could be saved for tomorrow. Then I headed back up to work at a hotel café, mainly just as a translator or steaming milk for lattes.”*

“I was 19 years old when I got [to Los Caporales], so they didn’t have much confidence in me yet. But I felt like the skills that I transferred from Escoffier to the hotel really helped me move up the ranks, because they saw that I knew what I was doing. I felt like that really gained their confidence.”*
Oscar Beltran, Escoffier Boulder Culinary Arts Graduate

During his externship, the resort held a competition among the onsite culinary staff to create a taco al pastor recipe without the use of ancho chile—a common ingredient.

Most of the competitors were experienced cooks and chefs, but 19-year-old extern Oscar decided to throw his toque into the ring. With some help from his chef manager and mentor, Oscar created his own taco recipe inspired by popular local flavors. He incorporated sour orange juice and star anise into his pork marinade and topped the taco with a sweet/spicy strawberry salsa and fresh grapefruit. 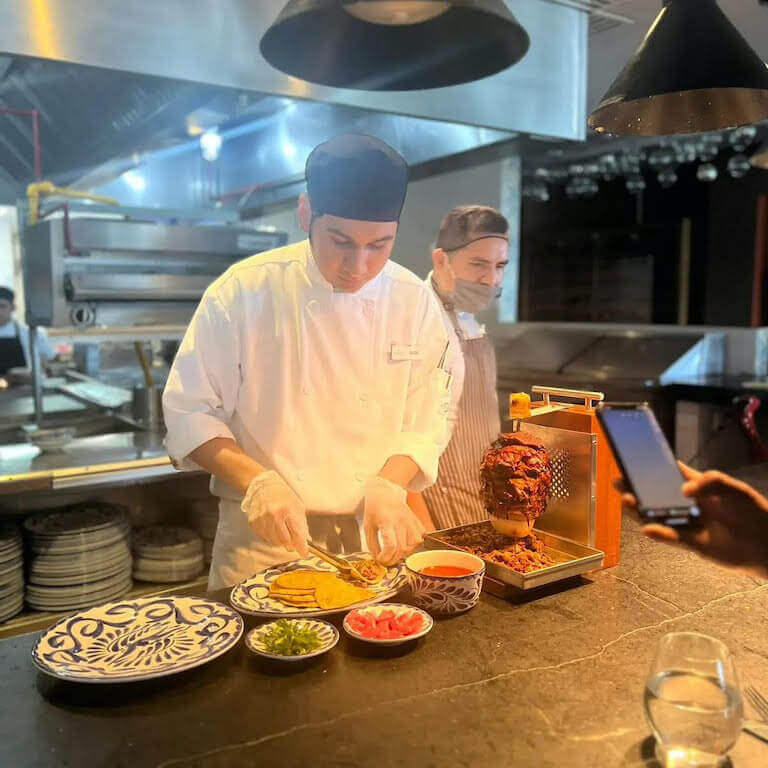 Oscar assembling his entries into the taco al pastor competition.

Competing against the other hotel chefs, he was incredibly nervous. “They had me present mine first, which I was scared about. I felt like once I presented mine, the other chefs would present something much better, and [the judges] would completely forget about my taco. The whole time I was presenting, I was stuttering and my voice was shaky. I felt like it was going to make me lose.”*

But when the judges reached their verdict, Oscar and a night shift chef had received first and second place. He was ecstatic! A run-off between the two winners ensued—and all four judges again chose Oscar’s taco.

Now, there’s a chance that Oscar’s taco could live on in the master book of recipes at Moon Palace, long after he leaves Mexico. That’s quite the journey for a 19-year-old who didn’t know what a julienne cut was just a year and a half prior!

“The risk I took [doing my externship in] Cancun and joining that competition was amazing. I learned so much and met all kinds of new people and chefs.”*
Oscar Beltran, Escoffier Boulder Culinary Arts Graduate

What’s Next for Oscar?

Oscar’s next step will be to find a job in California, close to home. He plans to save up and go back to school, either for pastry arts or for a business degree.

Long term, he’d like to work in London at some point, and possibly open a fine-dining Mexican restaurant of his own. “When you think of Mexican food, you think of a big plate with beans spilling out one side and carnitas stacked high. Which is great. It’s my culture and I love it. But I want to show people the art behind it as well.”*

Risks Can Pay Off!

As we’ve seen, Oscar has stepped into new challenges—even when they’ve been intimidating ones. His willingness to take risks has earned him a solid start in the culinary world, and we look forward to seeing where that courage takes him in the future!

“I would say my choice of going to culinary school instead of a four-year college was worth it. I love cooking, and I wouldn’t have known if I hadn’t taken the chance of trying it first.”*
Oscar Beltran, Escoffier Boulder Culinary Arts Graduate

Oscar’s story also shows the value of mentorship. From Escoffier Chef Instructors who pushed him to speak up in class to his chef manager at Los Caporales who helped him to victory in the al pastor competition, experienced culinarians have guided Oscar through these steps and helped him to become a success.

Whether you’re a soon-to-be high school graduate, or an older adult looking for a new path, Escoffier can help. Explore our culinary programs to find out which one may lead to the future you’re dreaming of.

To read more stories from real Escoffier students, try these articles next:

After Homelessness, An Austin Pastry Student Finds Stability in the Kitchen