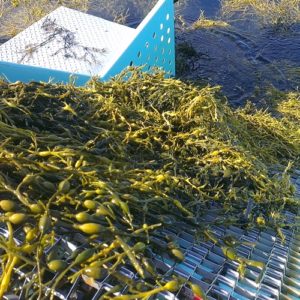 Seaweed is just one of the hottest food trends for 2016.

We’re just a few short weeks into 2016, and already chefs across the country are already turning their attention to the remainder of the calendar. As in years past, 2016 will be highlighted by a number of important culinary trends. Whether you’re a full-fledged chef or still enrolled in a culinary arts program, these trends will help guide your work in the kitchen for the weeks and months to come. Here are four of the hottest trends to expect in 2016:

1. Koji
As Bon Appetit explained, koji is expected to become a huge hit in kitchens everywhere this year. Hailing from from Japan, koji is is a unique rice that’s been treated with a mold – aspergillus oryzae – to help improve its overall flavor. Though its long been used in soy and miso sauces, many chefs in Japan now stir koji into vinaigrettes and marinade, as the rice has great flavor without the need for sugar, oil or salt. A number of restaurants in New York City have already added koji rice to the menu, with some making it the centerpiece of several dishes, namely modified versions of risotto and rice pudding.

2. African cuisine
In late 2015, the National Restaurant Association surveyed some 1,600 chefs to compile a list of the biggest culinary interests. In a list that also included sustainable seafood and hyper-local food sourcing, African flavors were revealed as being especially trendy. In fact, the BBC said that African food could become the next big gastronomic trend. Despite its reputation as being unhealthy – with too much oil and little protein – several chefs told the BBC that African meals are not only tasty but have a certain warmth and elegance. African dishes are marked by a number of key ingredients, including yams, jollof rice and the bark of the sweet baobab tree.

3. Root-to-stem cooking
Nose-to-tail butchery refers to using every part of the animal during the cooking process. More recently, as Popsugar pointed out, that same principle is being applied to vegetables with root-to-stem cooking.  As is the case with cow and pig meat, more and more chefs are trying to be environmentally conscious, and they’re finding new and inventive ways to use every part of the parsnips, garlic, celery, radishes and other root vegetables. Some chefs are trying out pickling and juicing, while others are using veggies to make pesto and stock. Vegetables in general are growing in popularity, and NPR reported that they may overtake meat products in popularity in 2016.

4. Seaweed
Similar to the NRA survey, the Specialty Food Association also released its own trend forecast for 2016. On that list, seaweed has emerged as a new flavor sensation, with the potential to overthrow the vastly popular kale. According to the SFA, seaweed not only has a classic flavor – pairing well with a number of ingredients – but it’s also noted for being sustainable in terms of farming and harvesting. Plus, seaweed has displayed a number of potential health benefits, as the San Francisco Chronicle reported. Among other mineral components, seaweed is chock full of vitamin K, calcium and iron.