Some lucky people know exactly what they want to do with their lives from a very young age. For others, it takes some time for various interests and passions to suggest a career path.

For Auguste Escoffier School of Culinary Arts graduate and private chef/educator Shane Witters Hicks it took trying out a different career entirely to realize that his heart was in the kitchen.

The Makings of a Plant-Based Chef

Shane loved math and the planets when he was young — so much so that thought he might become an astrophysicist when he grew up. But he also had fond memories of helping his mom, a wonderful home cook, in the kitchen.

As a competitive athlete in his youth, cooking and nutrition were important to him. He started to develop his own healthy, plant-based meals to fuel his running.

But while he enjoyed cooking, he saw himself working as a power systems engineer. He completed his undergraduate degree in physics with a minor in computer science and environmental sustainability, and then he was ready to start his new career. He spent the first six months after graduation working at the National Renewable Energy Laboratory (NREL) in Golden, Colorado.

But soon, he realized that wasn’t where he wanted to be.

“I can specifically remember sitting at my desk and realizing that I was [spending more time] thinking about what I wanted to create for dinner that evening than I was on my current project at NREL….And if I’m devoting more headspace to food and cooking than I am to what I’m doing at work, then a change needs to happen.” 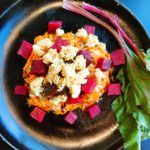 It didn’t take long for him to realize that his love for cooking, the vegetarian lifestyle, and passion for environmental science could be combined into a future as a plant-based chef.

How to Start? Shane Gives the Restaurant Life a Try

So what was the first step? Shane decided he should try the restaurant life before he invested in a culinary education. So he updated his resume and went from restaurant to restaurant to see if there were any openings for an inexperienced line cook. To his surprise, he got two job offers that same day.

“I ended up being offered two jobs on the spot that day, which taught me that the culinary industry is a very different place than the engineering industry that I was used to.”
Shane Witters Hicks, Escoffier Boulder Graduate & Private Chef/Educator, The Soulful Spread

Shane left Golden for the more robust culinary town of Boulder, Colorado. After about 18 months working in restaurants, he was ready to advance his culinary career further. So he enrolled at the Auguste Escoffier School of Culinary Arts Boulder campus. 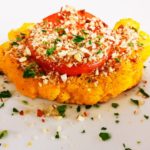 The Vegetarian at Culinary School

“To be completely honest, culinary school ruined my plant-based diet,” Shane says with a laugh. But it was an intentional and temporary shift.

Shane knew that Escoffier’s traditional French curriculum would include a lot of butter, cream, and meat. He decided that in order to cook the best plant-based foods, he should know what the traditional versions tasted like first. [Since then, Escoffier has launched fully plant-based degree and diploma programs.] He has no regrets about opening his eating habits during culinary school. “I’m really glad I did that,” he says. “I made everything, and I tasted everything.”

One of the biggest benefits that he found during his time at Escoffier was that not only did he explore how to cook, but why certain recipes are the way they are. Restaurants are fast-paced and non-academic — not an ideal learning environment. But the best chefs can both execute quickly and appreciate the history and science behind a dish.

“I got to know the history behind many different cuisines and dishes of the world,” Shane says. “If I worked at a restaurant, and I learned how to make coq au vin over and over again very rapidly for restaurant service, I wouldn’t have a sense of academic appreciation for the history behind it, and how it how it became a classic French dish, why it became popular, and why it’s so good.” 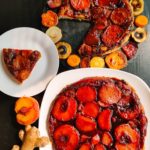 Since graduation in May 2020, Shane has gotten much closer to his plant-based roots, but hasn’t completely returned to a plant-based diet. “As you might understand, after eating and creating some of the world’s best foods, it’s kind of hard to kind of restrict back into that box. So I’m not quite there. But plant-based is still where my passion lies.”

Shane started to benefit from mentorship before he even enrolled at Escoffier!

“[Chef Jensen] was actually who I met when I first toured Escoffier,” he explains, “and he was probably the one who convinced me that this is where I want to be. He was so willing to work with me. I got the sense from him that the Chef Instructors here truly care about the students and the quality of the education. Having gone through the entire Escoffier experience in Boulder now, that’s the one thing that stands out to me above other educational experiences that I’ve had.”

“The chef instructors [at Escoffier] truly care, and they will go out of their way, out of their personal lives, to ensure that students have a quality experience. What more can you ask for from your education?”
Shane Witters Hicks, Escoffier Boulder Graduate & Private Chef/Educator, The Soulful Spread

“Getting [Chef Lepke’s] perspective on everything culinary was invaluable,” Shane says. “Since he was born and raised in Germany, he gave us a European view on cooking. And he has served as executive chef in many different capacities…I felt like after Culinary Arts, I could graduate right then and would have been 100% satisfied with my education!” He also developed a relationship with Escoffier’s Boulder campus President Kirk Bachmann who helped Shane on his mission to teach! Chef Bachmann is passionate about plant-based cooking, and he hired Shane to teach the first plant-based Home Cook classes at Escoffier.

“You have mentors in a restaurant setting, but you won’t get the variety. At Escoffier, you’re exposed to 10+ executive chefs, and you’re surrounded by them every day. There’s a wealth of mentorship at your fingertips.”
Shane Witters Hicks, Escoffier Boulder Graduate & Private Chef/Educator, The Soulful Spread

After graduating in May 2020, Shane went the entrepreneurial route. He’s started his own company, The Soulful Spread, which offers two primary services — delivering meals as a private chef and teaching cooking classes.

During the COVID-19 pandemic when people were eating out less than ever and trying to juggle working from home with remote schooling, Shane decided to offer private chef services in the Boulder area. By offering meal prep, fully cooked meals, and delivery, he can take the work of meal planning, grocery shopping, and cooking off his clients’ plates.

While he encourages plant-based eating, he’ll cook anything for his clients. Still, he loves to be creative for his vegetarian clients. In addition to private chef services, Shane teaches personalized cooking classes. He starts with a phone interview with the client to learn what they like to eat, and what they hope to learn. Then he customizes the lessons for each client, so no two are exactly alike.

“I am willing to create an experience based around any dietary preferences,” he says, “so definitely not restricting it to vegan or even vegetarian. But most people that come to me are desiring a vegetarian experience, which has been kind of eye opening for me.”

Tips for Vegetarians at Culinary School

What words of advice does Shane have for vegetarians or vegans who are considering culinary school? Before he provides his suggestions, he makes his position clear — you don’t have to give up your vegetarian or vegan diet to attend culinary school. In fact, vegan or vegetarian students will feel right at home in one of Escoffier’s plant-based culinary arts programs.

“I won’t tell anyone how they should eat or cook,” he says. “There are plenty of plant-based cooks who stay that way in school.”

Whether you stay vegetarian or eat meat during culinary school, don’t limit yourself, and go at it with everything you have.

“The world needs to know how good plant-based is,” Shane says. “We need more people who understand where the carnivores are coming from, and welcome them into the world of a ‘Meatless Monday.’” Be Compassionate For the Way Others Eat

Shane believes that the more compassion we can have for other people’s way of eating, the better. And a good way to foster that sense of compassion is by going to a traditional culinary school like Escoffier. You’ll only benefit from having that empathy for how other people eat.

“Even though my passion lies in plant-based and vegetarian, I do not judge anybody’s dietary choices. I’ve come to realize in the culinary industry that food is so emotional and cultural, and people have had such different backgrounds and upbringings. Who am I to judge what they like to eat?”

“Food is so personal, and I am not in any place to judge where anybody is at. So that’s why I’m willing to cook to any dietary preferences.”
Shane Witters Hicks, Escoffier Boulder Graduate & Private Chef/Educator, The Soulful Spread

It’s Not Too Late to Make a New Plan

Shane’s path is a testament to the fact that our path is never set in stone. Even though he started out with a career in power systems engineering, he could pivot and still find work that supports his plant-based, environmental values.

A culinary career doesn’t have to be where your path starts. Unlike in the past, it is common for many adults nowadays to change their career multiple times throughout their life. Working adults who are interested in starting a career around plant-based cuisine can now easily complete an online degree or diploma in plant-based cooking.

Like Shane, you may have an education in a different field, or even a whole career in another industry before you realize that you want a future as a culinarian. And like Shane, you just have to take that next step to see if a career in food is right for you. If it is, a culinary education can help you to make the jump from amateur to professional cook.

For more articles about Food Entrepreneurship and Sustainability, try these next: