Cajun and Creole. Are these two types of cuisine the same? And if they’re different, what makes each one unique? Whether you’re exploring Cajun and Creole cuisine or seeking to better understand Louisiana’s past, you may have asked yourself these questions.

In short, Cajun and Creole are two distinct ethnic groups with some overlapping characteristics. A journey through Cajun and Creole cuisines can help you understand the similarities between the two as well as appreciate the differences.

What’s the Difference Between Cajun and Creole?

Understanding the history and culture that shaped food can help develop a deeper appreciation for the dishes you cook and eat. With that, it’s helpful to know the difference between the often confused Creole and Cajun people.

While some people use the term Creole to refer to people born and raised in urban areas around New Orleans, the term doesn’t refer to race. Scholars still debate the exact definition of Creole, but most agree that it refers to one’s birthplace. People born in Acadia before the United States was formed—and these individuals’ descendants—are known as Creole. These populations consisted of individuals from a wide variety of races and cultures, including French Canadians, West Africans, native Chitimacha and Choctaw, and those of Spanish descent living in the Caribbean.

The term Cajun appeared later down the line. Today, the term is used to refer to Canadians who arrived in Acadia. That means that while some Creoles are Cajun, not all Cajuns are Creole.

Both Cajun and Creole cuisines highlight the blending of the cultures present in Southern Louisiana. You can find rich French-based roux mingling with fresh seafood and wild game as well as African ingredients like okra. Most of the dishes are hearty, have roots in the local environment, and were developed to make the most of what was on hand.

So, what’s the difference between these two cuisines? While they are very similar, they do utilize different ingredients. Cajun food is typically spicier than Creole food, and it also contains more pork and crawfish. Creole food utilizes more ingredients like tomatoes, shrimp, oysters, and crab. 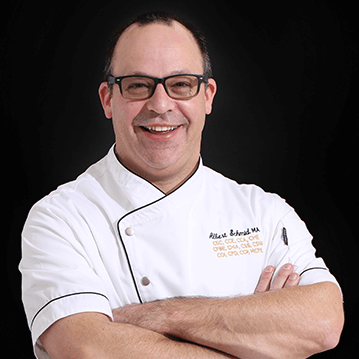 “As a child growing up in New Orleans, I have fond memories of Cajun and Creole cooking. Some of my favorite dishes include Shrimp Etouffee, Red Beans and Rice, King Cake, Beignets, and Oysters. Shrimp Etouffee is basically a spicy shrimp gravy over rice — what’s not to love?”*
Albert Schmid, Escoffier Chef Instructor

Most Popular Cajun and Creole Dishes

When you start exploring any new cuisine, getting the unique flavors and ingredients down can seem overwhelming. If that’s the case for you, it can be helpful to first eat, and then try cooking, a few signature dishes. The following will give you a good introduction to the flavors and cooking styles found in Creole and Cajun cuisine.

Jambalaya, a signature dish of Louisiana, is comfort in a bowl. This one-pot recipe combines many of the ingredients and flavors of Cajun and Creole cooking.

This dish is one of a few that have distinct Creole and Cajun varieties. Creole jambalaya commonly includes the obligatory “holy trinity” (diced green bell peppers, onions, and celery), along with chicken and sausage, vegetables, tomatoes, and of course seafood. Cajun jambalaya is similar, but does not feature tomatoes. A plant-based version of gumbo served over rice

Gumbo is the dish that brings all the flavors of Southern Louisiana together. Chefs start with a roux and the holy trinity, add shellfish and pork, finish with a rich stock, and thicken with filé powder (ground sassafras leaves).

As with jambalaya, there are both Cajun and Creole versions of gumbo—as well as hundreds of variations of these two versions. The Creole gumbo typically includes tomatoes, while the Cajun version doesn’t.

Cajun cuisine without crawfish is like French cuisine without butter—it’s almost unheard of! Since crawfish are found throughout waterways in Southern Louisiana, it’s no surprise these crustaceans feature in jambalaya, jumbo, and good ol’ country crawfish boils.

However, one dish that screams Cajun cooking is crawfish étouffée. Like many Cajun dishes, this one starts with a roux and the holy trinity of chopped onion, green bell pepper, and celery. Cooks then add a rich stock, seasonings, and succulent crawfish tails. The end result is a rich stew-like dish that is often served over rice. 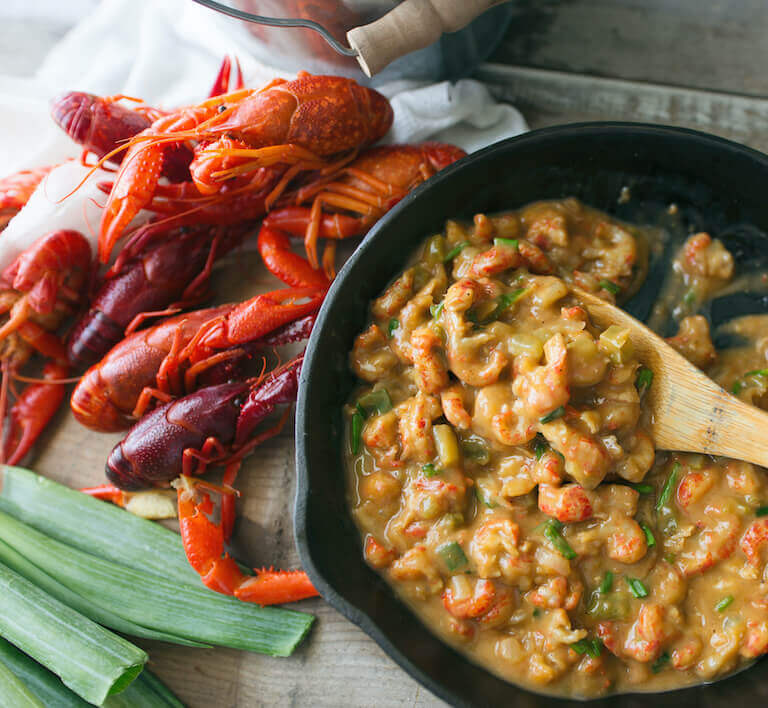 Like many Creole and Cajun dishes, Andouille sausage traces its origins back to France. However, the Cajun variation puts its own spin on the classic French version.

While many sausages are made from ground meat, Andouille is made from chopped pork. This gives Andouille a coarser texture than other types of sausage. The sausage is also double smoked—once while the meat is whole and again after the sausage is stuffed.

Along with pork, Andouille contains garlic and other spices. This creates a flavor-packed sausage that adds depth to gumbo, jambalaya, and other dishes.

Another sausage that’s at home in Cajun and Creole country is boudin.

Unlike many sausages, making boudin involves stuffing sausage casings with cooked rather than raw ingredients. The filling consists of a blend of chopped pork, rice, seasonings, and vegetables—it’s basically a whole meal stuffed in sausage form.

While classic boudin is made from pork, people can craft boudin from alligator, crawfish, chicken, and more.

If trying out new cuisines is something that stirs your passion and brings a smile to your face, why stop with Cajun and Creole food? The world is full of diverse ingredients, flavors, and cooking techniques…but it’s up to you to explore them.

Culinary school can introduce you to dishes from around the world as well as the skills necessary to prepare them. Students in Escoffier’s Culinary Arts program can spend a whole course diving into global cuisines and the history behind them, so they not only know what these dishes are but also where they came from and how to make them.

If you’re interested in continuing your culinary adventures alongside talented Chef Instructors and students, contact Escoffier to learn more about our programs.

Read these articles next to learn more about different diets and cuisines:

This article was originally published on December 28, 2015, and has since been updated.

American Regional Cuisine: The Best Dishes from Around the Country