When you hear the term ‘culinary school’ it might invoke the notion that it’s all food, all the time. At Auguste Escoffier School of Culinary Arts there are many classes that are dedicated to world cuisine and artisan pastries, but there are communications and business classes as well. And while the focus is on a formal well-rounded culinary education, there is also time outside of class that students can use to hone their skills while having fun, and giving back. One such opportunity is based at our Austin campus. In 2018 the “4U Crew”, brainchild of Escoffier Chef Educator Tammie Barnhill, formed as a way for students to give back to the community. Something that they could focus on that is bigger than themselves. Since its inception the group meets once every six-week term and students find so much joy in it that many return, term after term, to participate.

Their initial project was baking cookies for military troops. The goal was to find a product that would ship and store easily, but one that Chef Tammie could use to help sharpen students’ skills, as well. Since then, the 4U Crew has baked and decorated thousands of cookies, cupcakes and other sweets…including pet treats.

Their most recent project involved baking treats to take over to nearby Austin Animal Center. The lucky pets were not only treated with treats, but by personal delivery from our talented students. There were plenty of tail wags to go around that day.

While there are many pet projects for the 4U Crew, those that mean the most to mentor, Chef Tammie, are definitely military focused. This past January 4U Crew members created over 2000 pieces to deliver to the USS Carney, deployed in the Persian Gulf. It’s a group near and dear to her heart as her son is a Chief on this destroyer. “They can’t get fresh food shipments right now because of the high tensions in the area, so they are having to eat only canned foods”, Chef said. She secured shipment through the U.S. Postal Service and the group sent off 11 boxes; enough for everyone on board to receive six cookies and some Rice Krispies treats to boot. They were very much appreciated and the Crew received many letters of thanks: Thank you very much for the cookies! It was a morale booster for the crew after a busy and hectic time at sea. From the crew and myself thank you for supporting us.

Thank you so much for the cookies you all baked for us.They were very much appreciated and were quite delicious. What we do out here is quite stressful at times and every little thing helps.

I wanted to personally say thank you to you and your class for all of the treats! I ate over 3 bags and countless Rice Krispies and I regret nothing.

Doing Good in the Neighborhood

The 4U Crew is kept quite busy each term as they support many local establishments that do so much good for the community, including orphanages and women and childrens’ shelters. Because of the Crew’s good work, word got around. Through community outreach they are now contacted by various organizations that needs their help. One such group is the Aveda Salon near the Escoffier Austin campus. They reached out to see if the Crew could help them with a bake sale benefiting breast cancer research. The Crew graciously provided them with all kinds of baked goodies.

These words are not simply Escoffier’s tagline. It’s an essence that’s lived and demonstrated each day throughout the school’s staff and educators. And nothing is more evident than Chef Tammie’s passion when it comes to her group’s mission of supporting their community. “When I started the club I wanted a platform for students to be able to give to others. I believe in the power of giving and wanted our students to be able to be a part of something that would reach out to others. Time and again, the students come to the club meeting – giving up a Saturday morning – just to give back. It gives them an outlet to learn some techniques, such as specialty cupcake decorating, piping, etc. They are so happy to be able to give.” So happy indeed, Chef Tammie admits, that even graduates come back to give of their time. 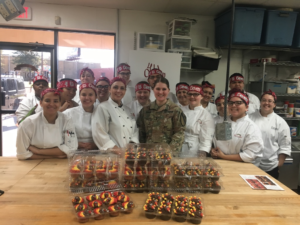 The success of the 4U Crew is demonstrated by Chef Tammie’s leadership and the dedication of the students each term. The group’s newsletter goes out to all Escoffier Austin campus students welcoming any new members and suggestions for organizations that might need their assistance. For the time being the group only bakes sweets for donations, but since the Crew consists of anywhere from 12-25 pastry and culinary students, Chef Tammie says that she believes donated meals could be on the horizon.

If you would like more information on Escoffier’s 4U Crew, please contact our Austin campus directly at 1-833-443-0618.

Escoffier Schools Give Back To Service Men & Women This Season

How Restaurants Can Give Back to Their Communities