Long before we had the sit-down restaurant experience we know today, fine dining was a highly exclusive affair reserved for aristocrats—who could afford to spend six hours of their day eating food. The idea that great cuisine could be served quickly and cost-effectively for large groups of customers didn’t become mainstream before the 1800s.

Then along came Georges Auguste Escoffier. The “king of chefs,” as one German magnate called him, invented the brigade de cuisine or “kitchen brigade”. Escoffier realized that if each kitchen worker specialized in different tasks, a restaurant could scale its operations and serve many more customers without sacrificing consistency and quality. Let’s look at some of the roles in this kitchen hierarchy.

Positions in the Brigade de Cuisine

Technically, there are more than 25 types of chefs who could work in the kitchen under the brigade de cuisine. However, every kitchen is a little different, as are the types of chef jobs available. Generally speaking, these are some of the most common positions in the kitchen brigade system:

To put it simply, the executive chef is in charge of the entire kitchen. He or she prepares the menu, decides what ingredients to purchase and oversees the operation as a whole. Executive chefs may act as kitchen expediters, meaning they help ensure that food coming out of the kitchen is correctly made and designated for the appropriate table. Executive chefs may also add finishing touches such as a drizzle of balsamic extract or a swirl of berry compote. 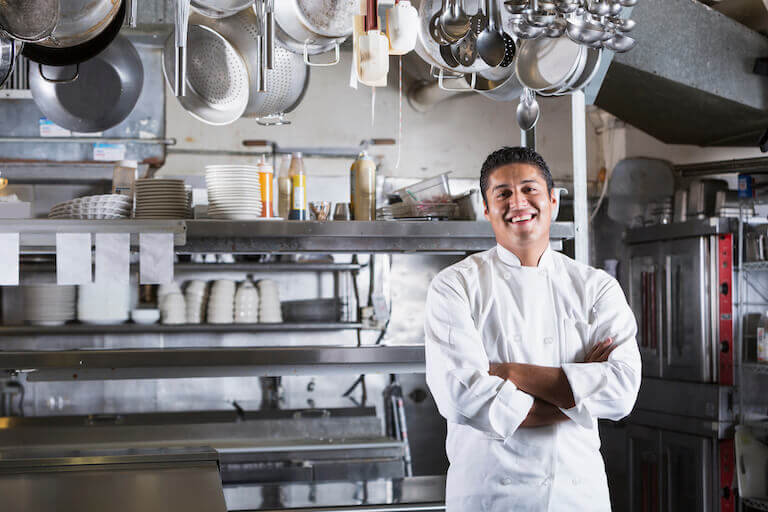 The executive chef is one of the most highly respected and coveted positions in the kitchen, which means it’s one of the harder statuses to achieve – and usually one of the highest paying positions. In order to occupy this station, you may need a wide array of culinary, communication, leadership, and business skills – many of which can be gained through a culinary education. Much responsibility falls on the shoulders of this role, but the reward can be fame when the restaurant gains acclaim.

The sous chef is second-in-command in the kitchen. They have a hand in just about every kitchen operation, including overseeing all of the other chefs in the kitchen, creating staff schedules, handling inventory management, enforcing safety standards, aiding in equipment maintenance and being ready to hop on any station as needed.

A sous chef must be able to weave in and out of practical tasks and leadership seamlessly – at one moment ordering out-of-stock ingredients and the next, expertly communicating with a team member about their punctuality. In many ways, the sous chef is responsible for supporting the head chef at all times, whatever form that takes. They play a crucial role in the kitchen and are heirs apparent to head chefs.

The garde manger role is uniquely responsible for preparing chilled dishes like hors d’oeuvres, salads, charcuterie boards, caviars, and pâtés, to name a few. The person in this position must have a blend of culinary expertise, creativity in food arrangement, and expert food handling skills since their dishes must stay cold.

The pastry chef is responsible for creating the dessert menu, helping to select ingredients and suppliers, overseeing pastry cooks and collaborating with the head chef on menu development.

Fine restaurants typically hire a pastry chef to run the dessert department. The person in this position may work independently or may be responsible for supervising a team of pastry cooks. Food presentation and intricate plating are often skills required or expected from pastry chefs. Don’t let the name fool you. While the saucier is indeed responsible for whipping up all the sauces needed for the restaurant’s various menu items, they also work on soups and stews, stocks and broths, gravies, and even the occasional pasta or dessert. They must possess the knowledge and skill to season sauces to perfection and ensure they’re just right consistency-wise.

Line cooks are the workers who do the bulk of the actual cooking. Many restaurants will have a head line cook for each station, also known as a chef de partie, who oversees apprentices for that station. They’ll typically need to have a host of culinary skills, including all the basic techniques, knowledge of flavors and seasonings, knife skills, and more. Additionally, line cooks and apprentices need to be team players, leaving their egos at the door and being willing to jump in where and when needed. For this reason, many of them either have attended or could be currently attending culinary school – which can help them hone their practical culinary and business skills.

Line cooks and their apprentices are usually assigned to one or more of the following stations, either on a permanent or a rotation basis:

There may be many more stations depending on the restaurant – including a soup station, a fish station, a sauce station, and a vegetable station.

Besides the brigade de cuisine, Escoffier left many other contributions to the culinary arts:

Last but not least, prep cooks do a lot of the preliminary work, like peeling and chopping vegetables. Some restaurants will task line cook apprentices with prep tasks, while others staff designated prep cooks.

At the very least, having knowledge of mise en place – the organizational system that keeps the kitchen running smoothly – is pretty crucial for prep cooks. In fact, prep cooks’ sole job might be to arrange the ingredients and equipment that higher-level cooks and chefs need.

“School really helped prepare me for the restaurant environment. I learned to work with all personalities in the kitchen. It wasn’t always easy to relinquish control of a dish and allow different people to be responsible for different aspects, but I learned that it isn’t about me controlling the food from start to finish, but about making a beautiful dish. Learning how to cook my food properly when there are a million different things going on around me took some getting used to, but I am so glad I learned how.”Antoinette Williams, Escoffier Culinary Arts Graduate*

While some online culinary students are fortunate to find jobs as a line cook or even a sous chef right out of school, many others benefit from working as an apprentice or a prep cook to get a foot in the door at a reputable, fine-dining restaurant and move up the ranks.

Other Positions in the Brigade de Cuisine

Besides the chef jobs in the brigade, there are a few others that don’t necessarily include the same type of culinary work.

The boucher, or butcher, is responsible for delivering high quality cuts of meat for the dishes being prepared by the brigade chefs. In days of old, this may have included slaughtering the animals, but today, most bouchers are cutting and grinding the meat to restaurant standards – trimming, slicing, and dressing until it’s up to par.

Bouchers may also be responsible for tracking inventory on the meat ingredients specifically and ordering when quantities are low. They might inspect incoming inventory for defects. And they certainly must keep their workspace and tools sanitized, as handling raw meat requires the utmost attention to cleanliness. 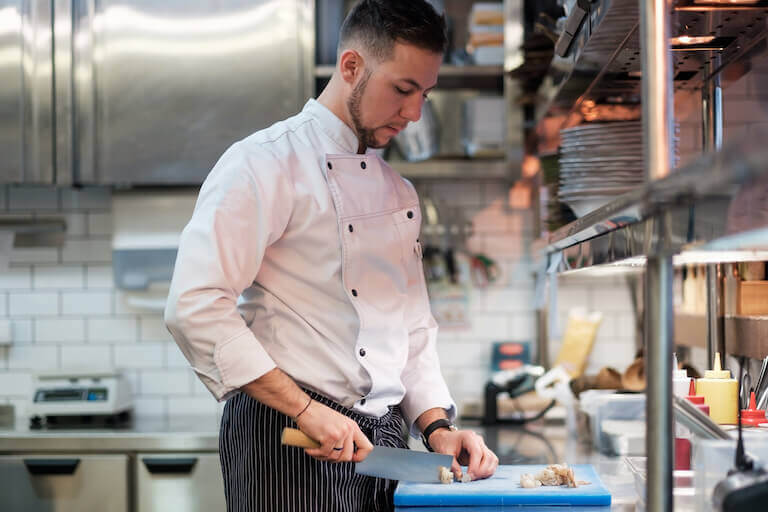 If you’ve ever had your food delivered to your table by someone other than your server, they could have very well been the Aboyeur. This person is responsible for ensuring that the correct food order makes its way from the kitchen to the correct table, and is placed in front of the correct patron.

Alternative terms for this position include Food Runner or Food Expeditor. This role includes finesse with timing to make sure that the entire course is delivered to the diners at the table at once, rather than in piecemeal fashion. Originally, the Aboyeur announced the orders to the kitchen, but these days most restaurants use advanced technology or ticketing systems for that task.

Got Your Eye on a Role in the Kitchen Brigade?

If any or all of these roles appeal to you, consider launching a career in the culinary industry. The typical path of a culinarian involves working one’s way up through the ranks of the kitchen hierarchy. At each level in the brigade de cuisine, you acquire more knowledge, skills, and experience to help you succeed in the next role.

“The reason I went to Auguste Escoffier School of Culinary Arts was to make it a career and not just a job living paycheck to paycheck. It opened my eyes to all these techniques that make my food the best I’ve ever cooked in my life. The school provided the methodology behind the basic recipes of everything that I needed to know for production…and the proper tools and ability to work in any kitchen.”Vanessa M. House, Line Cook, West End Tavern; Escoffier Culinary Arts Graduate*

A foundational culinary education can go a long way in preparing you for that first rung of the ladder. Explore the culinary arts degree and diploma options available from Escoffier. Whether you earn your education online or on one of our campuses, you can invest in your future and help set yourself up for success as you work your way up the ranks.

Enjoyed this article? Try these next:

This article was originally published on November 5, 2019, and has since been updated.

Should I Go To Culinary School? A Guide For Deciding