Blog > Culinary Arts > A Brief History Of The Chef’s Uniform

What is the first thing you picture when you think about a chef? You probably picture a tall white hat and double-breasted coat, right?

The chef’s uniform has become a well-known symbol of status, influence, and of course, delicious food. It took time and thought for the chef’s uniform to be what it is today and hold such symbolism. It has significantly changed over the years from merely a uniform outfit to each article of clothing serving a purpose in the kitchen.

From symbolism to double uses, we’re going to explore a brief history of the chef’s uniform, how it came to be, and why it’s such an honor to wear. The chef’s uniform we are so familiar with today was originally sketched by the world’s first celebrity chef, Marie-Antoine Carême, in 1822. In his sketch titled, “Le Maitre d’Hotel Francais,” two chefs stood next to each other, each donning white hats, double-breasted coats, and aprons tied around their waists.

It wasn’t until 1878 that the uniform became en vogue. Angelica Uniform Group started mass producing the outfit, making it readily available to chefs everywhere. Auguste Escoffier, the creator of Brigade de Cuisine and our school’s namesake, was the first to standardize the uniform. The chefs in the restaurants he managed in London were all required to wear the new chef’s uniform. 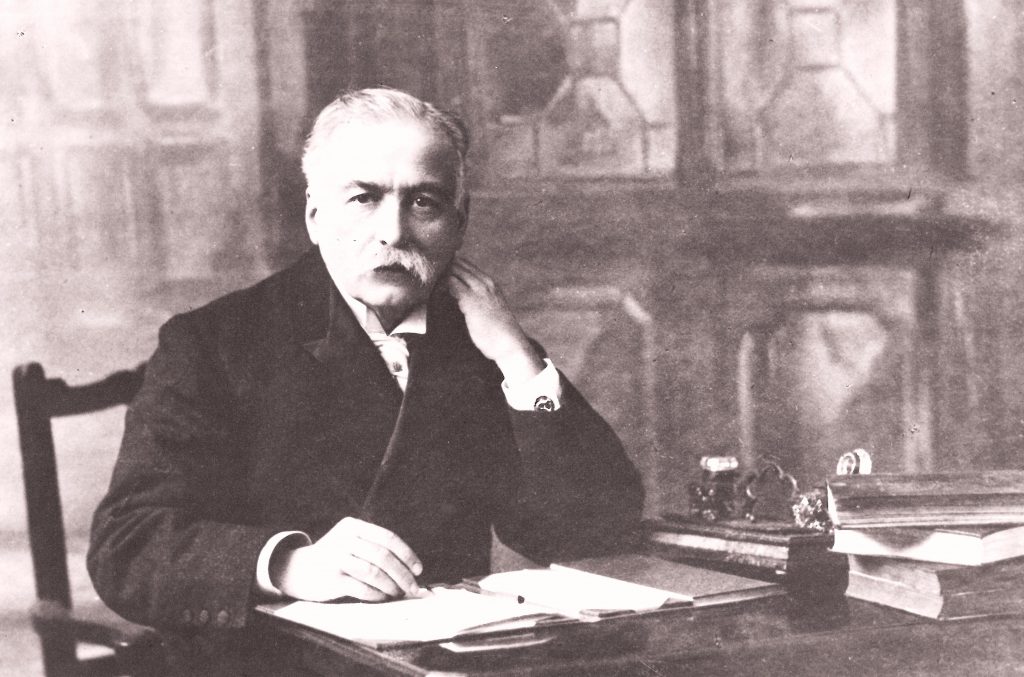 Auguste Escoffier, known as the “King of Chefs and Chef of Kings”

While the history of the chef’s uniform has included some changes and modernization, the outfit still closely resembles Carême’s sketch. Today, the uniform consists of a white hat, double-breasted coat, pants, and an apron around the waist.

Each of these articles of clothing holds great symbolism and versatile function to the chef wearing it.

The first thing you think of about a chef is the tall white hat. The proper term for this hat is toque blanche. “Toque” is Arabic for hat, and “blanche” is French for white, translating the phrase to “white hat,” which was adopted by the French.

A chef’s hat carries great symbolism and speaks to a chef’s experience and expertise. The height of the hat symbolizes how experienced a chef is. The taller the hat, the more experience he has.

The number of pleats in the hat shows how many cooking techniques and skills the chef has mastered. For example, one chef had 100 pleats in his hat, meaning he knew how to cook eggs a hundred different ways. The toque blanche also serves a functional purpose. The first is to keep the chef’s hair out of the food. The second is for the staff to identify where the chef is in the kitchen quickly – they just have to look for the tall white hat.

You may be wondering why a chef would dress in all white if they are cooking with sauces and oils that can easily stain.

The reason a chef’s uniform is white is to represent influence and an authoritative presence. It’s also seen as clean and pristine, two qualities you would prefer someone preparing your food to have.

The color also serves a functional purpose. White deflects heat rather than absorbs it; essential while working in a hot kitchen.

The coat itself is an extremely versatile item in the chef’s uniform. The heavy material protects the chef from heat, steam, and splashing liquids while cooking in a busy kitchen. Typically, the coat has long sleeves to cover the arms when reaching into ovens. However, most uniforms now are made with short sleeves to allow ease of movement. 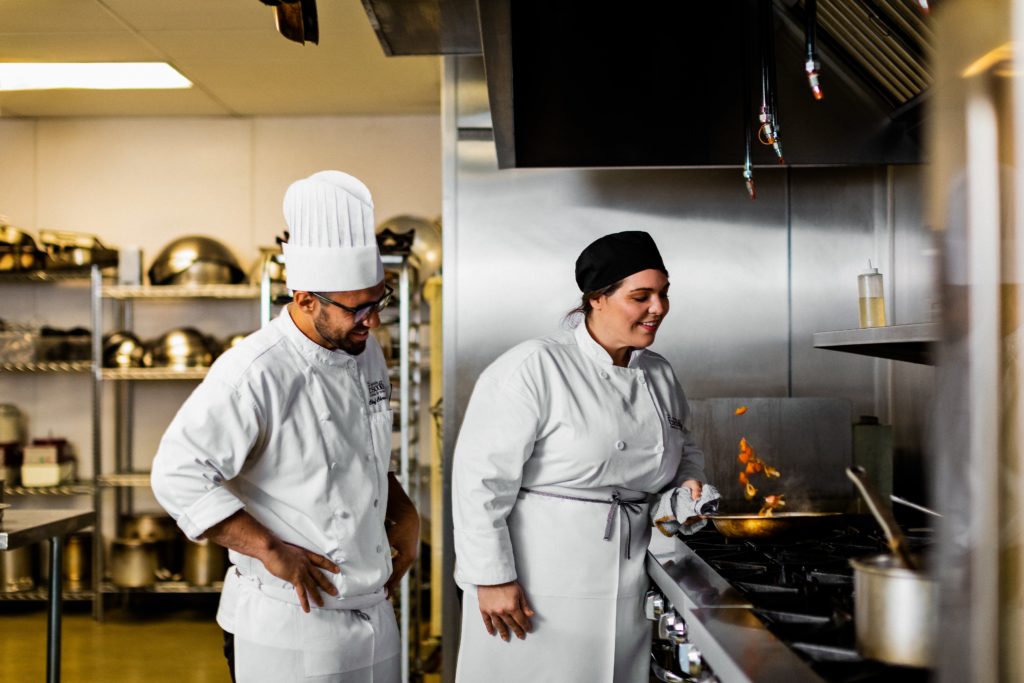 The coat was exceptionally designed for chefs to hide any stains. The double-breasted jacket is reversible, so one can quickly present themselves cleanly by folding down the flaps over any stains.

Running around a kitchen for hours on end means wearing comfortable and breathable pants. A chef’s uniform usually has black or white houndstooth patterned pants because it hides stains and spills very well.

The waist is typically elastic or a drawstring to provide comfort all day long. They are also made of lightweight and breathable material, perfect for hot kitchens. Side and back pockets are also part of the design to offer some utility.

Home cooks will wear aprons over their clothing to prevent them from staining and getting dirty. Chefs will wear an apron around their waists to protect their legs from hot spills, especially while carrying a plate or hot pot from the stove.

These aprons usually end just below the knee, so the chef can quickly move around the kitchen without getting tangled in the fabric. Typically, aprons are white, black, or striped to keep in line with the rest of the uniform. Study the Culinary Arts and Don Your Own Chef’s Uniform

It is an honor and privilege earned through hard work and study to don a chef’s uniform. Auguste Escoffier School of Culinary Arts could help you attain your chef’s uniform through its fast and affordable culinary and pastry programs. Taught by professional Chef Instructors, you are invited to learn from those who have earned plenty of pleats in their hat. Request more information to learn how Escoffier could help you begin a culinary career.

If you enjoyed this article, then read these next:

This article was originally published on February 17, 2016, and has been updated.

What It Takes To Be An Executive Chef

Your First Job In A Professional Kitchen