Blog > Culinary Arts > A History of the Chef’s Hat

Chefs wear a number of different hats, often acting not only as a cook, but also juggling the responsibilities of an accountant, a kitchen manager, and more!

In addition to the multiple figurative hats they wear, chefs are also typically required to wear a physical hat for sanitation purposes. But did you know that the type of hat a chef wears can tell you a lot about their role? Throughout history, chef hats have indicated factors such as title, rank in the kitchen, and even their level of expertise.

Learn how the traditional chef’s hat has evolved over time, and how it’s used today.

The History and Significance of the Chef’s Toque

The traditional tall, white, pleated chef’s hat is officially referred to as a toque, which is the Arabic word for hat. While this word has been used for thousands of years to refer to any brimless hat, the French popularized using “toque” or “toque blanche” to refer to a white chef’s hat.

Marie Antoine-Carême, an early pioneer of the grande cuisine cooking style, is widely credited with creating the standard chef’s hat that we know today. However, there are a number of possible stories explaining how the chef’s hat first emerged and how it evolved over time.

One of the main theories is that the chef’s hat came about as a way to keep hair out of food and maintain hygiene and cleanliness in the kitchen. According to one origin story, King Henry VIII supposedly beheaded a chef after finding a hair in his meal, so all the chefs after him were ordered to wear a hat while cooking.

Why Are Chefs’ Hats White?

The reason chefs’ hats and the rest of chefs’ uniforms are traditionally white is to indicate cleanliness in the kitchen. White is the easiest color for determining whether an object is dirty or clean, rather than dark colors which can mask stains.

Today, some kitchens choose to wear dark colored hats for that very same reason, especially if the chefs are working in an open kitchen. Occasional spills and stains are inevitable in kitchen environments, but it’s difficult to switch hats in the middle of service. Dark hats can give a more polished appearance while a chef works in front of guests when they don’t have the time to don a fresh hat.

In her book Passion of a Foodie, author Heidemarie Vos dispels the notion that hats were used solely to keep a chef’s hair out of his face. She cites another origin story that dates back to circa 146 BCE, long before the French adopted the hats.

When the Byzantine Empire invaded Greece, Greek chefs fled to nearby monasteries for protection. While there, they attempted to fit in by adopting the garb of the monks, including a large stovepipe hat. Even after the Byzantines retreated, Greek chefs continued to wear the hats as a form of rebellion and a sign of solidarity.

It’s perhaps that symbolism and sense of fraternity, Vos argued, that led other chefs, including the French, to adopt the hats in their own uniform.

Does the Height Matter?

Traditionally, the height of the chef’s hat was meant to signify station and rank in the kitchen. The executive chef wore the tallest hat in the kitchen, and the hats got a bit shorter as you go down the line. In other words, the height of your hat indicated your position in the traditional hierarchy in world-famous French chef Auguste Escoffier’s brigade de cuisine. Carême reportedly wore a hat that was 18 inches tall–supported in part by pieces of cardboard–to demonstrate his expertise.

Although this is not always the case in modern kitchens, the tallest hat in the kitchen still usually belongs to the most senior executive chef. What’s with the Pleats?

The origin of pleats in a chef’s hat is similar to the height. In the early days of the toque blanche, it was said that the number of pleats would often represent how many techniques or recipes a chef had achieved. For example, a chef would have 100 pleats in his hat to represent 100 ways he could prepare eggs.

Today, many chefs’ hats still contain pleats, but the number of pleats doesn’t necessarily signify a number of skills or anything in particular, other than an ode to tradition.

This is the style you probably think of first when you think of a chef’s hat. It has a straight sided crown of various heights based on seniority, with a floppy top. 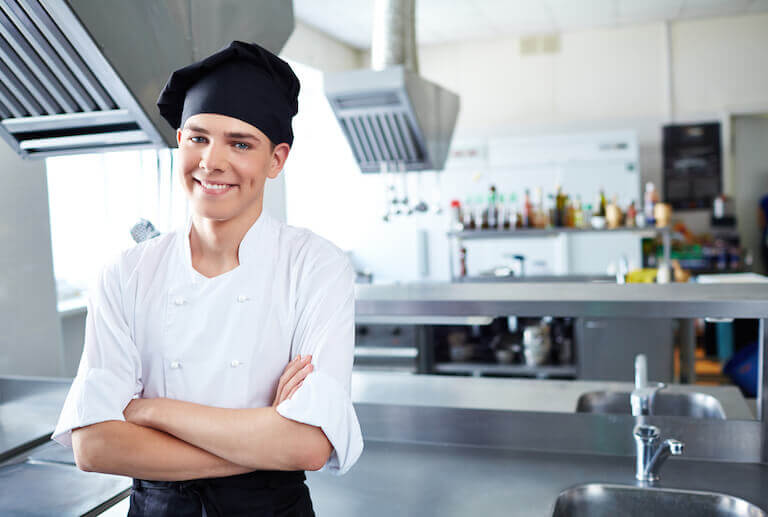 As style evolved, the chef’s toque developed into a tall cylinder shape, losing the floppy top. This type of toque is often now made of paper, which absorbs less heat than cloth hats, and is meant to be disposable when it becomes soiled. Sometimes cylindrical toques don’t have a top but instead are open at the top of the crown for maximum air circulation. 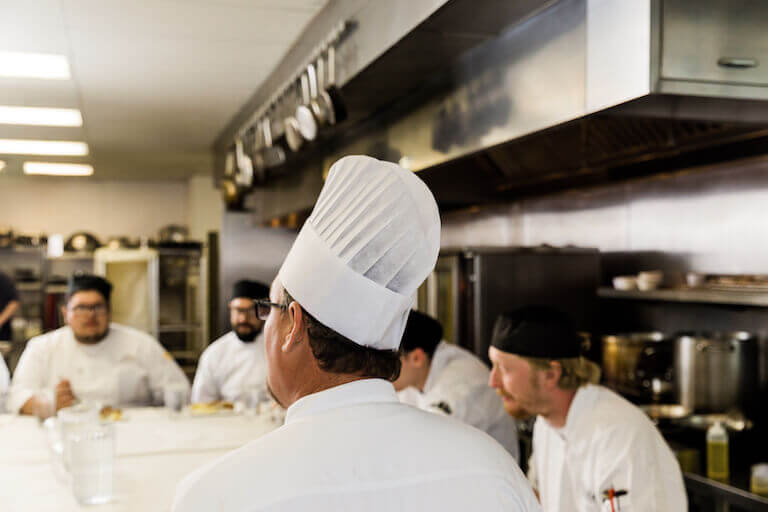 These flat-topped hats are popular in bakery settings. With its flat crown, a baker’s cap is technically a form of a traditional toque, just a very short one. They are lightweight, usually made of cotton, and easily washable. Skull caps are similar in appearance to the baker’s cap, but they fit snugly on the head rather than sitting on top of the head. Some modern designs have a mesh top for better air circulation.

Also similar to skull caps and baker’s caps, beanie-style chef hats are also lightweight and easy to adjust with a velcro strap in the back. They are a bit looser and slouchier in comparison to a tighter fitting skull cap.

Trading in Tradition for Functionality

Over the years, chefs have been leaning away from the traditional toque and more towards more functional forms of headwear. These days, you’re more likely to see a chef wearing a skull cap, a baseball cap, a simple hair net, or even a bandana—anything to keep their hair out of their face and out of the food. When it comes to the functionality of a chef hat, chefs look for factors like being lightweight, easy to wear, and easily washable. Optimal air circulation is also a huge bonus when you’re working long hours in a hot kitchen.

Oftentimes, a kitchen staff will opt to wear matching hats for a sense of camaraderie and teamwork in the kitchen. The modern chef’s uniform typically relays the style and vibe of the restaurant and varies more from place to place.

However, some kitchens still use the toque as a reminder of the culinary industry’s long and storied history. For instance, the Chef Instructors at Auguste Escoffier School of Culinary Arts wear the classic chef uniform, complete with a traditional white toque, while teaching students about this history.

If you’ve dreamed of someday donning a chef’s toque, contact us today to get started on your culinary journey.

Want to learn more about what chefs do?

This article was originally published on January 6, 2016, and has since been updated.